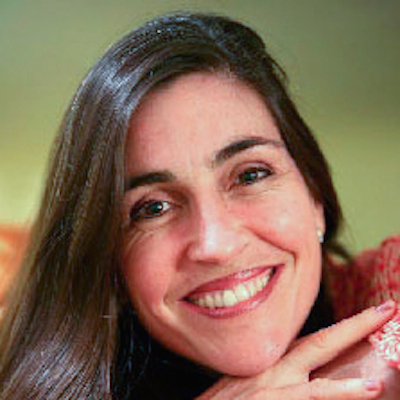 My name is Rosi Amador, and I am a native Spanish/English voiceover actor with no accent whatsoever in either language. I was raised both in Latin and North America so I’m a native speaker of both languages, bicultural and equally comfortable in both worlds. I can easily add an “Hispanic” accent to my English reads when required. My Spanish is best described as neutral Latin American; however, I can also infuse my Latin American Spanish with a Puerto Rican or an Argentine accent.

My voice is best described as friendly, sparkling, expressive, pleasing, warm and enthusiastic. It can sound childlike and fun, or professional, serious and formal, as needed. My clients tell me I’m easy to coach and a pleasure to work with. I believe it’s because I’m very flexible and attuned to their needs. I’ll voice your message just as you’d like!

I am originally from Puerto Rico, born to Josefina del Mar, actress, singer and dancer on Broadway, in Mexico and in Puerto Rico (film and stage), who was originally from NYC of Puerto Rican heritage; and actor/radio host Jaime Andrada, from Buenos Aires, Argentina. They instilled in me their love of music and the spoken word from a very young age. They raised me bilingually, emphasizing the importance of speaking, reading, writing and singing both English and Spanish with perfect enunciation and expression. Little wonder that I ended up in the arts and in media production as singer and voice actor or that I’m passionate about acting and singing!

Speaking of acting and singing, in the Fall of 2017 I was blessed to land one of the principal roles – fiery Puerto Rican mom, Camila – in Wheelock Family Theatre’s production of the musical In The Heights by Lin-Manuel Miranda (Hamilton) for a sold-out run of 18 shows in Boston. The musical received the 2018 Elliot Norton Award for “Best Ensemble.”

Also in 2018, I was honored to win a SOVAS Voice Arts Award in the category of “Outstanding Commercial Demo Reel.”

I feel incredibly lucky to be able to use my acting skills/speaking voice as a bilingual voiceover actor with my company, Amador Bilingual VoiceOvers and my singing voice as a professional Latin singer and touring recording artist (with Sol y Canto) and for a living. Like my parents, I became an entrepreneur at a young age, after graduating from Bryn Mawr College, which I attended after going to school in San Juan, Puerto Rico.

I enjoy creating my own path and have been fortunate to have found a partner in my husband, composer/guitarist/voiceover actor Brian Amador, to share this path with me, working out of our private home studio where we deliver sound/music at our clients’ request and compose original music.

I’ve sung Latin music professionally since 1984 and currently sing and play percussion with the award-winning Latin band I co-founded in 1994, Sol y Canto. With my husband, Brian Amador, bilingual voiceover actor, composer/guitarist and Sol y Canto co-founder, we can easily add music to any project with high fidelity. I believe that my enthusiasm for voice acting comes through clearly in my work as this is what my clients tell me.

I can complete projects in my own broadcast-quality professional studio or I’m happy to go to one of several nearby professional studios with whom I have longtime relationships. Since 1994 I’ve been honored to do hundreds of voiceovers for documentaries, medical/health institutions, podcasts, telephony, children’s books, eLearning, interactive websites, museums, commercials, and animated characters for small children, adults and 70-year olds.