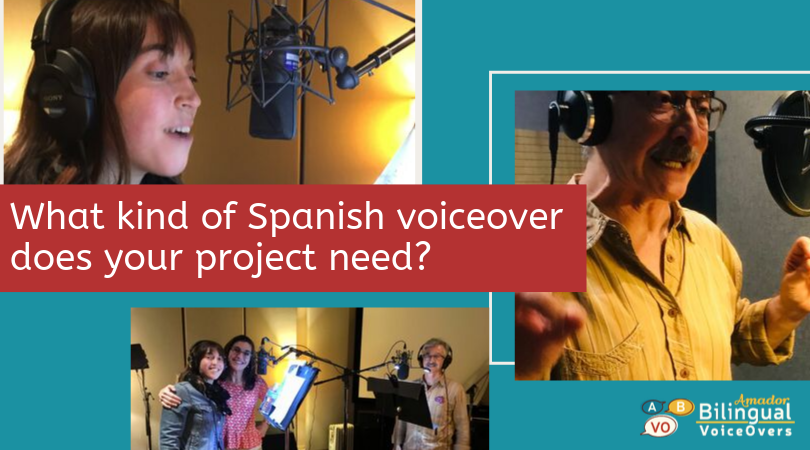 So you’ve decided you want a Spanish voiceover for your project? Good news! You are in the right place! As English and Spanish bilingual voice actors, we often receive inquiries and quote requests for Spanish voiceover of already-existing recordings in English. So, what’s next?

Consider translation the backbone of this project as this can impact your ultimate project goals. Here are some considerations when it comes to professional translations:

What kind of Spanish is right for your project? Think about the goal and objectives of your project and of course, your audience. As in English, throughout the Spanish-speaking world there are many regional accents and dialects.

Mexican Spanish is widespread, especially in the Southwest, California and Texas. Mexicans and people of Mexican descent comprise most of the Spanish speakers in the U.S.

Looking to target a national or international market? Recordings, especially commercials, targeted to a limited geographical area, may feature regional accents reflecting the majority Hispanic population of that region. In the commercial and entertainment world, however, producers long ago figured out that to reach a wider audience it made sense to use Spanish that was not regionally-specific, but more universally understandable and acceptable. This is often referred to as “Neutral,” “Neutral Latin American,” or “Standard” Spanish. I avoid the term “standard”, as there’s really no such thing – what’s standard in Latin America can be considered wrong in Spain, and vice versa.

A “Neutral Latin American” variant has the following characteristics:

While there are appropriate uses for regional Spanish in voiceovers, the advantages of using Neutral Spanish for reaching a wide audience are clear.

With a professional, Neutral Spanish translation, and a professional recording, you maximize the impact of your message allowing it to appeal to a broader audience. And for those of us in the communication business, reaching people with an effective message is what it’s all about.

Now here’s a twist, what about having a Hispanic accent in your English voiceover?

We can do that too! In fact, we recommend you use our Acent-O-Meter to better gauge what level of accent makes sense for you. These levels of accent may make sense if you are wishing to appeal to a Hispanic audience that predominantly speaks English or if you are working on a project that requires accent variety for creative purposes.

Whatever your voiceover need is, we would love to help you!