In late December “Hidden Figures” premiered, a movie about three African-American women mathematicians who helped NASA launch the first American into space. My family and I were so excited to see this film that we watched the movie as soon as it came out! It was inspiring to see strong black female protagonists in a portrayal of a pivotal moment in the history of space travel. We loved the movie and strongly recommend it for more reasons than I can list here.

Shortly before “Hidden Figures” hit the movie theaters, my daughter Alisa and I had the pleasure of recording Spanish overdubs for NASA. We lent our voices to two knowledgeable female engineers who serve as instructors (Alisa’s character was also an astronaut).

One of the things we love about being voiceover artists is the joy and honor of partnering with inspiring educational producers who create bilingual content that will impact Hispanics in the United States. The NASA videos we overdubbed in Spanish are aimed at encouraging Hispanics, especially women, to pursue careers in engineering.

Much as “Hidden Figures” motivates the next generation of genius women of color to pursue STEM, the voiceovers we did with NASA allow us to join in this incredibly important mission. Representation matters! “Hidden Figures” and our overdubs are proof of this.

We are grateful to Robert F. Azzardi and Tracy A. Sprouse of the NASA Glenn Research Center in Cleveland, for entrusting their series of educational videos to our family and for their appreciation of our passion for just this type of project.

Defending women’s rights and empowering women are missions I strongly believe in that took flight during my life-changing days at Bryn Mawr College, so it was such an honor for me to voice for L’Oreal Paris all of last year. Every Wednesday, I had the pleasure of recording bilingual overdubs in English and Spanish for L’Oreal’s weekly international podcast series featuring the voices of their leaders from around the globe.

I found their L’Oreal Foundation’s “For Women in Science Program” (in partnership with UNESCO), which provides support for women researchers, particularly inspiring. I frequently recorded with Brian, and occasionally our daughter Sonia participated, which was even more fun.

It was enticing to me to voice how new, environmentally-sensitive products are being sustainably produced, and how these can empower global communities of women to look and feel their best.

I’d love to know what you think of the podcast samples and this “Projects We Love” highlight, so please email me, Rosi, via our website! 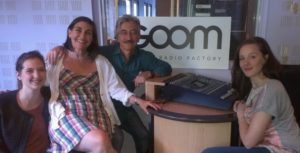 Incidentally, last July we were so lucky to meet the podcasts’ producers in person at Goom Social Radio Factory headquarters in Paris. Merçi Juliette et Laura!