The Society of Voice Arts and Sciences’ Voice Arts® Awards have been described as the Oscars of voice acting. So we were thrilled when Rosi won the 2018 SOVAS award in the category of Outstanding Commercial Demo Reel! SOVAS presented the awards on November 18th in a gala celebration at Warner Brothers Studios in Burbank, CA.

The talented team of J. Michael Collins and A.J. McKay handled production. Since Rosi was unable to attend the celebration in person, J. Michael was on hand to accept her award. The Society chose Rosi’s demo from a stellar group of nominees.

Rosi’s demo reel is in English and Spanish, reflecting her pride in her bicultural/bilingual background. Significantly, the demo is a collection of progressive political spots. These reflect her desire to lend her voice to causes she believes in. 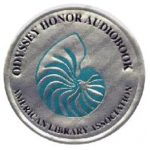 The Odyssey Award is given annually to the publisher of the best audiobook produced for children and/or young adults, available in English in the United States.

Essentially the Grammys of audiobooks, An Audie Award, bestowed annually in the United States, recognizes outstanding audiobooks and spoken-word entertainment.

Brian Amador’s narration, space-age music, and a multitude of sound effects come together fantastically in this audio and picture book pairing about the life of sound artist Juan García Esquivel…

This audiobook version of the picture book biography is magical.

Live Oak Media asked Brian to narrate the classic children’s story by Munro Leaf in Hispanic-accented English, and the production garnered a prestigious Earphones Award in 2017.

With a gentle Spanish accent and leisurely pacing, narrator Brian Amador lends just the right ambiance to the classic tale of Ferdinand, the young bull who has absolutely no interest in bullfighting. Just as Ferdinand moves at an unhurried pace, so, too, does Amador.