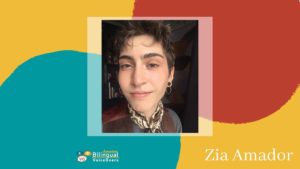 It is my absolute pleasure and honor to feature my incredibly talented son, Zia Amador in this blog post. Zia recently returned to the world of voiceover after several years’ hiatus, out in the workforce, while he’s studying once again to pursue his multiple artistic passions. Zia was raised singing with us and has continued to study guitar and bass, and does some composing as well. He has a great voice! Ironically, it was the pandemic that brought us together. He wanted to be able to safely see our family, so he moved back home in June. You can’t imagine the moment when we all four hugged after months’ of social distancing! Brian and I feel so lucky to be living with both of our twins at the moment as they progress in their creative journeys. We feel like we’re living the dream!

I asked Zia to talk about his experience in the world of voiceover acting and the opportunities for inclusivity his voice represents. At 24 years old, Zia is currently studying at Massachusetts College of Art, the country’s only public university-level art school, where he is majoring in SIM: Studio for Interrelated Media, which allows him to combine his music study with a wide variety of arts media from textiles to event tech and production.

His personal story is one that I’m certain resonates with many young adults; as a young transgender man he feels that his transition has been a wonderful asset, both personally and professionally, allowing him to derive joy from voicing important messages in education and addressing contemporary challenges faced by millennials and Gen Z’ers.

“Usually they’re looking for a voice that isn’t affected one certain way. The way I talk sometimes I’m perceived as a gay man over the phone since I have more inflection in the way that I speak, so it’s, like, not particular to one gender presentation,” he explains.

As he navigates the opportunities available to him, Zia has noticed how much more comfortable he is with his voice now, allowing him to be more receptive to constructive criticism and to deliver work he’s proud of. He responds well in directed sessions and feels fortunate to have the resource of the ABVO studio — which takes care of production from start to finish, a luxury among young voice actors. Voiceover is not just a job for him, it’s the sense of accomplishment that comes from being part of something bigger. It’s supporting a mission to spread awareness about important topics in a way that’s representative of a wide spectrum of the population.

He added that “a lot of content for sex education that’s coming out now aims to be accessible to a wider audience, including queer people, and that’s why they’re looking for a voice that’s less binary.”. In educational messages geared towards a younger audience, that’s particularly exciting to Zia. “If kids hear a voice that’s not stereotypically male or female, that’s awesome,” he said.

It wasn’t always easy. Zia went through a period of doubt, where he wasn’t sure what niche his voice would fit into. Having done voiceover work for years with a higher pitched voice, he was usually doing spots for children’s apps, games, and books.

“My voice was something that I was very uncomfortable with before starting my hormonal transition. I’m now at a point where I really like my voice and enjoy it. It’s been a very grounding, embodying and beautiful experience,” he said.

He soon discovered that his new range allowed him to deliver more meaningful messages, like the bilingual call to action to report on sexual assault for the Family Planning National Training Center he recorded with his twin sister, Alisa Amador, produced by JSI, a public health care and health care and health systems consultants and researchers dedicated to improving health outcomes for all.  “It’s more of an acting challenge compared to things like children’s voiceover where you just need to sound really excited. The subtlety of conversational narration is a way cooler acting challenge to me,” he said.

Zia is skilled in native Spanish and English voiceovers (we’re all so happy that we insisted on maintaining Spanish as our home language!) and can also do a light accented English to target bicultural audiences living in the U.S. He’s worked with the Museum of Albuquerque, Pandora, Lectura Books, Just the Truth PAC,  and many other nationally recognized brands.

“Now I get to do a lot more work about things that I like, educational work, mental health and gender, literature, and bilingual understanding,” he said.

I’m truly proud of Zia, and so happy that he is finding joy in his creative expression in so many different ways that allow him to express his unique voice in this complicated world we live in. A world that’s better off with him in it if you ask this proud mama!

Want to get in touch? Call the ABVO studio at 617-492-1515 or email him at zia@amadorbilingualvoiceovers.com.