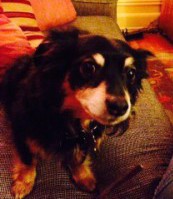 Like many small businesses, Amador Bilingual Voiceovers is a family-based enterprise. Our entire family participates in the business to some extent. Rosi and I both work as bilingual voice actors, as do our twins when they’re not busy with school or other work. And then there’s Azure, the 9-year-old Chihuahua-Long Haired Dachshund mutt we inherited a few years ago. (We still haven’t decided if he’s a Chihuachshund or a Dachuahua.)  Azure contributes to the business in his own ways. In fact, he’s the Perfect Voiceover Dog!

If you have a voiceover recording studio in your home, one absolute requirement is that noise be kept to a minimum. This requirement can be at odds with owning a dog, as often they like to express themselves vocally. Fortunately for us, Azure is the strong, silent type. Or at least the silent type. He doesn’t scratch at the door. He doesn’t whine. He almost never barks, except when he’s outside and sees a bigger dog. Which in his case is almost any dog. Inside the house, he’s like a little Zen master, meditating in his bed or in a sunny spot on the floor, or occasionally coming downstairs to the studio if he wants company.

But What Does He DO?

Of course, the absence of negative behaviors is not enough to qualify Azure as the Perfect Voiceover Dog. It’s also about the positive things he brings to our business, and to our home.

Many studies have shown that petting, holding and cuddling with a dog lowers stress in humans and makes them feel calmer and happier. People who live with dogs don’t need the studies to tell them that.

And That’s Not All

Of course just about any dog can make its humans feel calmer and happier and help them get a little fresh air and exercise. But the Perfect Voiceover Dog can also IMPROVE YOUR PERFORMANCE! Say what!!!?? That’s right. If I get a script that calls for a warm, empathetic, reassuring read, all I need to do is pick up my little buddy, or even just imagine holding him, and POOF! I sound more warm, empathetic and reassuring. Imagine holding something as cuddly as a baby and as wise as Yoda, and you get an idea of the feeling he inspires.

To my fellow voice actors I say, if you’re wondering what’s missing in your studio or in your life, maybe you need a Perfect Voiceover Dog. If you’re not sure of what breed to look for, I recommend a Dachuahua.