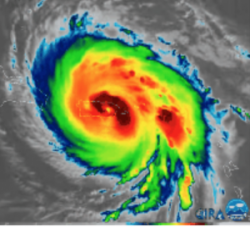 After Hurricane María hit, my family and I decided to use our voices for Puerto Rico, to help in any way possible, as soon as possible. I believe, as do many of my closest friends who’ve chosen to remain on the island, that as devastating as this experience has been, what’s next for Puerto Rico represents a huge opportunity.

Through creativity, open-heartedness, and hard work, my fellow Puerto Ricans can create a just recovery, one that doesn’t enrich the privileged and ignore the rest. And we on the mainland have a historic opportunity to help our brothers and sisters in ways that our government has failed to do. Here are some of the things we chose to do to support Puerto Rico’s recovery:

While I no longer have relatives on the island since my parents and abuelita passed away, I still have many dear friends that I consider my extended family in Puerto Rico. My friends are all doing okay considering the devastation on the island. Their work as creatives allows them to work globally. Many others are not so lucky, and hundreds of thousands of people have left the island for economic reasons. I felt so incredibly sad and angry for all my Puerto Rican compatriots who are still struggling, many of them sick and without resources during this crisis.

Hoping to help my island, my husband, fellow voice actor and musician, Brian and I produced two fundraising concerts with our Latin music ensemble Sol y Canto, along with special guests including our daughter Alisa. The first concert was on October 20th of last year, and the second happened just recently on February 18th. Between the two fundraisers, we raised over $12,000 thanks to the remarkable generosity of those who attended and others who sent a donation anyway. We sang our hearts out and people gave in kind! Photos and videos of the concerts (if you’re curious) are on our Sol y Canto Facebook page. (Incidentally, here’s the story of how we transitioned from music to full-time voiceover.)

While planning our first fundraising concert, I also wanted to put my voiceover talents to work for Puerto Rico. I approached my friends and longtime clients, the award-winning Boston-based agency MORE ADVERTISING, an expert cause-oriented business whose mission aligned with ours. I asked them if they would partner with me in producing a bilingual public service announcement to raise awareness and funds for my Puerto Rico. MORE came through with flying colors, writing copy, setting up the media buy, and working with me through several iterations until we nailed the PSA’s – all pro-bono! On our end, our fabulous engineer Steven Hopkins then produced the spots, I voiced in English and Spanish, and Brian added beautiful music (yes, he’s also a talented composer).

The PSAs we created highlight the Massachusetts United for Puerto Rico Fund (MA United for PR) and aired throughout Massachusetts over many months. The fund was created under the umbrella of the Boston Foundation, and it has raised over three million dollars and counting for grassroots community organizations in Puerto Rico. While Puerto Rico has slowly been rebuilding since the hurricane first hit, funds are still desperately needed. If you’re interested in donating to help Puerto Rico, you can give to MA United for PR easily by clicking on this link. More donation options are listed below.

In addition to raising money at our Sol y Canto concerts (join us – concert schedule here!), we encourage everyone to donate online to continue helping the people of Puerto Rico. Sadly, thousands remain without access to electricity, food or proper medical care.
You can help by supporting NGOs such as Grassroots International’s “Just Recovery” Fund, which supports the “Comedores Sociales” (soup kitchens) and other community-based projects in Puerto Rico. You can also send a check to Grassroots International, 179 Boylston Street, Boston, MA 02130 with “Just Recovery Puerto Rico” in the subject line. Your donations make a difference, we promise!

Yet a fourth option was brought to us by our close friend in San Juan, Emmy Award-winning public television and documentary producer Caridad Sorondo, who is helping the non-profit, Puertorriqueños con Morovis, (Puerto Ricans with Morovis (town), to help with the town’s reconstruction. Caridad is producing a documentary honoring the town’s bicentennial (1818-2018). Still, only 49% have electricity and potable water is intermittently available. A check can be mailed to: Puertorriqueños con Morovis at Condominio El Centro I,  500 Ave. Muñoz Rivera, Suite 216, San Juan, PR 00918.

Through Grassroots International, the Massachusetts for Puerto Rico Fund at the Boston Foundation, the Saravá Foundation and Puertorriqueños con Morovis, donations bypass the bureaucracy and get to the people who need them.